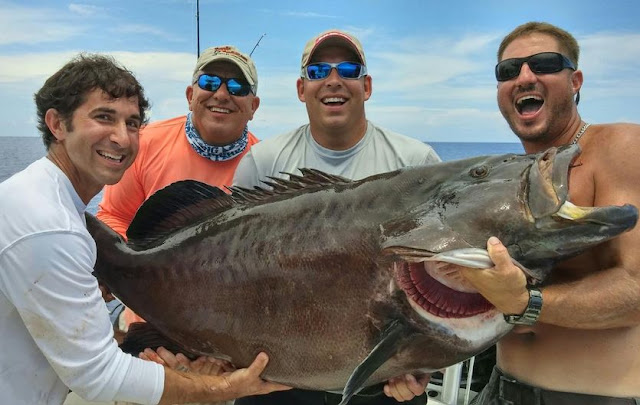 Just when Alex Newman was ready to give up and declare defeat at a charity fishing tournament Saturday, history hit his line..


The fish that took the Bonita Springs man's hook turned out to be a specimen that could break a 12-year-old world record.
Newman managed to land the 124.18-pound fish to win the 3rd Annual Offshore Rodeo Fishing Tournament to benefit Ronald McDonald House Charities Southwest Florida.
The tournament was held out of Bootleggers Waterfront BBQ and Salty Sam's Marina.
Anglers took to the Gulf and vied for prizes in 10 different species including African pompano, cobia, dolphin, grouper (excluding gag, goliath and Warsaw), hogfish, kingfish, snapper, triple tail, tuna and wahoo.

Alex Newman of Bonita Springs hoists his potential world record black grouper he caught Saturday during the 3rd Annual Ronald McDonald House Charities rodeo fishing tournament. (Photo: Special to The News-Press)
Newman said he and his crew fished for about 2-and-a-half hours. "We thought we were defeated," he said. "Then all of a sudden our luck changed."
Newman's grouper weighed 124.15 pounds and was measured at 57 inches with a 48 inch girth.
"That was a trip," Newman said Sunday. "I wasn't even expecting it to be a record-breaking fish."
Newman said that he and his crew on the Honey Money, a 33-foot Invincible, at first thought the fish was about 90-pounds.
"But when we were lifting it up we couldn't lift it," he laughed. "I fish the Gulf a lot. This is the biggest fish I've caught. When that thing popped up it was like a dinosaur."
According to the International Game Fish Association, which collects and verifies world records worldwide, the current record for a black grouper is 124 pounds caught Jan. 11, 2003, in the Gulf of Mexico off Texas.
"They fight hard," he said of the black grouper. "They're heavy. You need a big reel and stay on the fish."
He said an angler also needs a lot of luck.
"Everything has to come together and luck has to be on your side," he said. "You have make sure it doesn't run into a shelf or tie up in a wreck."
Newman, 30, owner-operator of Executive Woodworks of Fort Myers, has fished in the tournament previously and this year was using a custom bent-butt rod built by Sewell Custom Rods of Fort Myers.
His crew on the Honey Money included Eli Mendez, who owns the boat, Denny Watkins, Jason Schreyer and Louis Santagata.
"We worked hard at it," he said. "We kept a lot of large fish, fish people dream about catching."

Members of the Sunset Air team show off the 124-plus pound black grouper caught by Alex Newman during the Ronald McDonald House rodeo fishing tournament Saturday in the Gulf of Mexico. (Photo: Special to The News-Press)
Newman said he has been scoping out the area where the fish was caught for more than 2 years. "The fish move a lot out here so you never know," he said. "I never thought I'd get this fish here."
Newman's grouper is going through the proper avenues for it to be considered a true world's record.
"It would be great to get a world record for Fort Myers," he said. He said the fish is a state record and he will see how it goers for the world record, acknowledging that going for a world record through IGFA means "jumping through a lot of hoops."
More than 400 people participated with 32 boats in the tournament, Angela Katz, development director for the local Ronald McDonald House charities, said.
Those taking part caught more than 1,200 pounds of fish with Newman's boat accounting for more than 182 pounds of that total.
"Everything weighed was donated to the charity," Katz said. "That was cooked as the meal for the dinner. It was the freshest grouper you can get."
Katz said the goal for the tournament was to raise $80,000 for the Ronald McDonald House. A figure should be known by the end of the week and Katz said that a raffle with a 2015 Kia Soul remains open until
Saturday.
ABOUT BLACK GROUPERS
Black grouper are perhaps the largest species of Mycteroperca in the Atlantic. They can be found on offshore wrecks and reefs in Bermuda, Florida, the southern Gulf of Mexico, Caribbean, down to southern Brazil in the south Atlantic. Coloration in black grouper can vary, but their sides typically exhibit a rectangular pattern of dark grey blotches. The edges of the second dorsal, caudal, and anal fins are also dark black. Juveniles feed mainly on crustaceans, while adult fish prefer fish.
Like other grouper, when hooked black grouper are dogged opponents that must be turned quickly before they retreat to cover. They will take a variety of natural and artificial baits, and are considered outstanding table fare.
Source: International Game Fish Association

Alex Newman, far right, and fishing crew with the 124.15-pound black grouper he caught Saturday, a possible world's record. Special to The News-Press