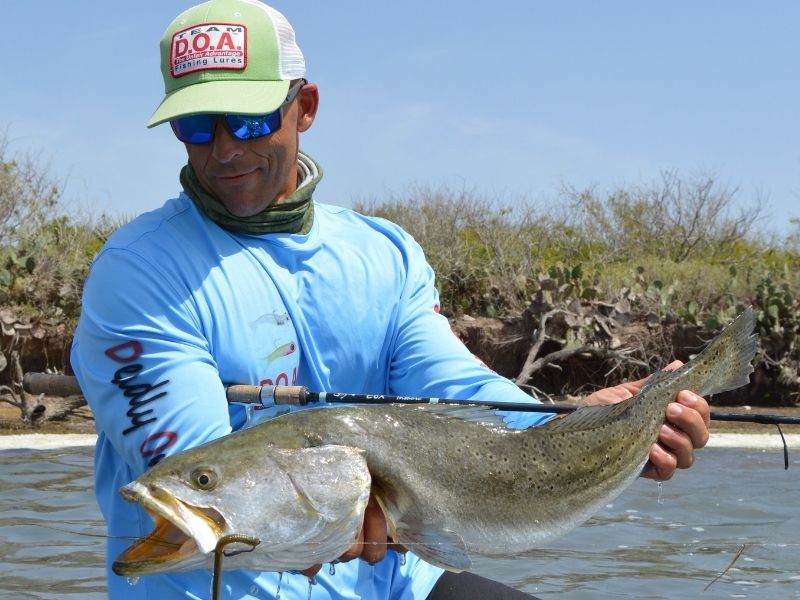 Most anglers will agree that gator-sized seatrout are one of the most elusive and wary fish found on the flats. But often overlooked, is what should be done before & after it’s caught to help ensure its survival. Below are four tips for handling trophy sized seatrout:

1) Landing The Fish
In South Texas the summertime heat can be merciless. Water temperatures on many of the shallow lagoon systems practically boil with averages reaching around 80 degrees (Fahrenheit) where DO (dissolved oxygen) levels are seasonally at their lowest. When a large seatrout is hooked and begins putting up a fight, its body’s need for more oxygen rapidly begins to increase, putting it in a state of stress if the demand is not adequately met. Once the fish is brought to boat side try to avoid hoisting it into the boat deck. As it’s a good idea (if your physically capable and the water is shallow enough) to hop out of the boat and meet the fish in the water. This will help to keep its temperature stable and reduce heat stress.

2) Handling the Fish
Once a big gator is thrashing around on the end of the line, try to think of a mortality clock that’s started to tick. The decisions you make next will increase or decrease its chance of surviving.First, wet your hands in the water before reaching for the fish to protect its slime coat. Lift it using both hands, with one hand supporting under its head and the other behind the belly near the midpoint of the tail. A good grip over the back behind the shoulders will also work as well. Don’t squeeze its belly and don’t “hang” it by a gripper or scale. Fish live in a zero gravity environment with no internal support structure. The weight alone of a large trout hanging vertically can cause internal injuries and damage to the connective tissue that supports its jaw.

3) Photos
Most of us rarely experience the euphoria of holding a giant trout for a photo, but when that opportunity arrives, being prepared may prevent an unfortunate loss to an incredible trophy. Always keep your camera within arm’s reach so that photos can be taken quickly and easily. Keeping a fish suspended or laying on a boat deck while you dig around for the Nikon should be out of the question. Prolonged time out of the water can lead to hypoxia or temperature stress, caused by the fish’s inability to breathe out of water.

Think the scenario out in advance: Are you fishing alone or with a partner? If you’re fishing with a buddy, then inform them in advance where the camera, and dehooking tools are kept on your boat. If you’re wading, it’s a good idea to have a waterproof camera attached around your neck. This will prevent having to make a long hike back to the boat for it, which under the hot sun could mean a death sentence for a large gator.

Take a few quick pictures then ease the fish back into the water, and then make a few drops that completely submerge its body. This will help keep it cool so that you can take a few more shots before releasing it.

4) Releasing The Fish
Ease the fish back down into the water using both hands keeping a hold of the tail. Gently push the fish forward in the water lightly forcing water through its gills. If you’re in an area next to a drop off or channel, try to revive the fish near the deeper areas where the water temperature is cooler. Once the fish can pull free from a loose hand, it should be home free.